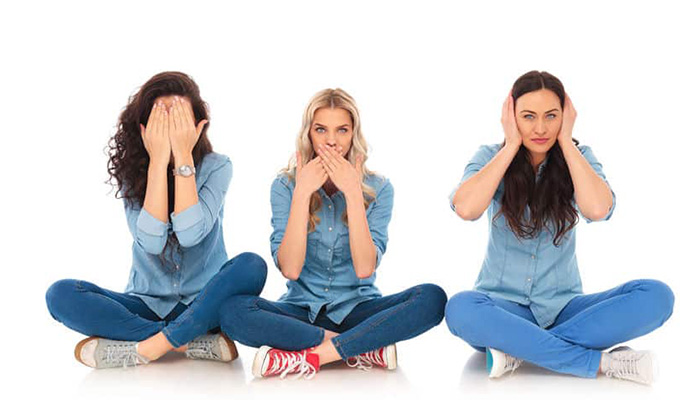 The zealotry unleashed in the name of cow vigilantism that saw the brutal death of a Muslim man in UP a few weeks ago is still vivid in our memory. Only weeks before that we watched on television a group of African students being chased and beaten by a local mob in Noida. Around the same time Gurmehar Kaur, the 20-year-old student of Lady Shri Ram College in New Delhi, was trolled on social media for speaking out her mind against war atrocities that killed her dad. It wasn’t long ago that television channels, newspapers and social media competed among themselves to attack priests and nuns in Kerala following the arrest of a rogue priest who allegedly impregnated a minor. They pounced on those hapless people like wild dogs and disrobed them in public, so to speak.

And in the face of such brute force what has been the response of the so-called responsible members of the society that includes all of us? How many of us chose to speak for these victims even though we knew they were wronged? We chose to be silent, didn’t we? Why?

Because it did not concern us. It was SOMEONE ELSE’S PROBLEM;

Because the man attacked in UP was a Muslim, NOT ONE OF US;
Because the students beaten-up in Noida were Africans, NOT MY COUNTRYMEN;

Because Gurmehar Kaur, who “asked for trouble”, was just another girl, NOT MY SISTER;

Because the innocent priests and nuns who were bracketed with the wayward ones and shamed publicly were NOT MY BROTHER OR SISTER. We also conveniently forget the fact that for a few rogue priests and nuns, there are hundreds of thousands of others who selflessly work for even the ones who throw muck at them.

The well-known aphorism should shame us: “The only thing necessary for the triumph of evil is that good men do nothing.” And that is exactly most of us do. It is because we the so-called good men do not raise our voices in protest that such vigilantes go around attacking everyone who does not toe their line. It is because we choose to look the other way that innocent people are trolled on social media driving some of them to death. It is because we choose to be silent that some don the garb of moral police and terrorise the naive. Silence is tantamount to acquiescence.

One of the favourite quotations of late US President John F Kennedy was based upon an interpretation of Dante’s Inferno. It says, “The hottest place in hell is reserved for those who in time of moral crisis preserve their neutrality.'” In the Inferno, Dante and his guide Virgil, on their way to hell, pass by a group of dead souls outside the entrance to hell. Virgil explains to Dante that these souls cannot enter either heaven or hell. And what was their sin? They had never taken a side while they were alive. They had spent their lives watching which way the wind was likely to blow.

I am reminded of the German pastor Martin Niemoller who penned a famous poem from the Nazi concentration camp. He had initially supported the Nazis but later opposed them. Blaming his own silence in the early days of Nazi atrocities, he wrote this famous ‘Holocaust poem’:

Much of the problem in our society stems from the indifference of good men. As that great reformer Dr Martin Luther King junior, whom I have great respect for, put it: “There comes a time when silence is betrayal. And that time is now.” King goes on to say, “The ultimate measure of a man is not where he stands in moments of comfort and convenience, but where he stands at times of challenge and controversy.”

Speak we must, and speak out at the right time and place. That’s the measure of a man that the youth should aspire to. We must fear evil men. But there is another kind of evil which we must fear most, and that is, the indifference of good men.

This is not a call to arms, it’s a call to end the silence, to speak for what we think is right and to stand up and be counted. Silence is not a virtue, as you may have been told in another context. Silence is betrayal when hapless individuals look to you for support but you choose to be quiet, silence is sin when an innocent person is attacked and you look the other way, silence is a crime when you see someone being hauled over the coals for no fault of his/her, and you choose the comfort of silence.