“God has always been good to me. He has given me everything that I need. Whenever I felt the need for anything, God has always provided for me,” says 62-year-old Malini. One would think the lady is so lucky she never have had to go through the kind of struggles that all of us face some time or other in our lives. Until you come to know the story of her life, the tragedies that she had to face and the fight on her hands even at this age.

Malini was married to a daily wager. Even though they did not have much to save for the rainy day, things were okay and they were able to earn enough for their daily bread as she supplemented the family income by milking the cows at various houses and working in their kitchens. But even after years of marriage, they did not have a child. Finally after prayers and sacrifices, they were blessed with a son who they named Ashish.

The first tragedy struck the family in the form of the realisation that their son was mentally challenged. The boy needed constant attention and care which affected her work in the neighbourhood families. In about two years, they were blessed with a healthy son Arun. Managing two children, one who required constant care and attention, while working in other houses was too tough for Malini.

Years of struggle continued. By now, Ashish could not move about and he had been confined to the bed. He had to be washed, dressed and fed on the bed. Did she ever feel that her son was a burden? “Not at all,” she told this writer. “On the contrary, I treat him like a saint. He is better than all of us as he is a special child of God. God blessed me with two sons, one is intelligent and the other maybe less intelligent. But God found me worthy of taking care of this saintly child.”

Times changed, and Arun, the younger, joined his father in his painting job. His father had started work as a painter of houses a few years ago. Life was more or less steady for the family although Malini needed to supplement the income rearing cows and working as maid in the neighbourhood. Arun took turns to take care of his brother. He would carry him around on his back and bring him chocolates whenever he came back from work.

Meanwhile, Malini’s husband fell ill and was suffering from pulmonary diseases. She had to take care of both her son and husband who were confined to bed. In about a year, she lost her husband. The family’s only support was Arun who then got married as he thought his mother needed the help of his wife as she had to work in houses as well as take care of his brother.

Arun was blessed with two children Suma and Srini. Thanks to some help from government, they built a small two-bedroom house and moved into it from the shanty they had for their home. Arun was a responsible and lively man who took care of the family and provided the support Malini needed. He was the life of his friends who would take to social projects in their area. He would organise small plays in the locality, arrange games and other activities during Onam and temple festivals. Anyone in need of money or material, Arun was the man to contact.

Malini could not ask for more from God. A lively family with two children and a son and daughter in law who attended to her elder son and provided for the family’s needs. She felt the happiness too good to believe.

As though God did not want her to feel so elated, tragedy struck on October 20, 2016. Arun was returning home from work on his bike with a friend of his as a pillion rider on that rainy late evening. Seeing a pothole he applied the brakes and was soon hit by a speeding Kerala State Road Transport bus. His friend was thrown to the pavement while Arun came under the wheels of the bus. Although the bus came to a halt and Arun was pulled out it was too late. His friend took him on his lap, and soon with a cry ‘Amma’ he left this world.

Arun’s elder daughter Suma is now studying in Class 6 while the younger son Srini is just two and a half year old. His wife works as a sweeper in a bank and earns about Rs 2,000 a month, hardly enough to make both ends meet. BRIDGE has adopted this family and provides it the necessary help. Malini has no complaints as she says, “God has given, God has taken away.” One only wishes if many more could retain her smile and sanity in the midst of such tragedies. 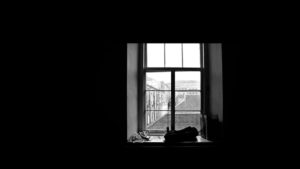